Kei Komuro, the newlywed husband of Japan’s Princess Mako, stands out from Japan’s royals not just for his commoner status — but his university degree.

Most of the Imperial House of Japan studied in the UK.  Komuro, 30, holds a Juris Doctor degree from a university more than 5,000 kilometres away: Fordham University in New York.

By most measures, these facts are not noteworthy — by Japanese royalty’s exacting standards, however, they are.

Japan’s royals face huge pressure to conform to tradition and meet exacting standards of behaviour, with each move intensely scrutinised.

A furore erupted after tabloid reports alleged Komuro’s mother had failed to repay a four-million-yen (US$35,000) loan from a former fiance.

When the couple’s union was finally announced earlier this month, the Imperial Household Agency said Mako was suffering complex PTSD because of the media coverage.

Mako and Komuro did not conduct traditional wedding rites and gave up the lump-sum payment usually made to women marrying out of the royal family, reportedly worth up to 153 million yen.

Under the rules of the imperial family, Emperor Naruhito’s 30-year-old niece Mako gave up her royal title as she wed Kei Komuro, who is the same age and works for a US law firm.

“To me, Kei is irreplaceable. Our marriage is a necessary step for us to be able to protect our hearts,” she told reporters after the marriage was registered.

“I have been scared, feeling sadness and pain whenever one-sided rumours turn into groundless stories,” she added as the newlyweds read out rehearsed statements in a soberly decorated hotel function room. 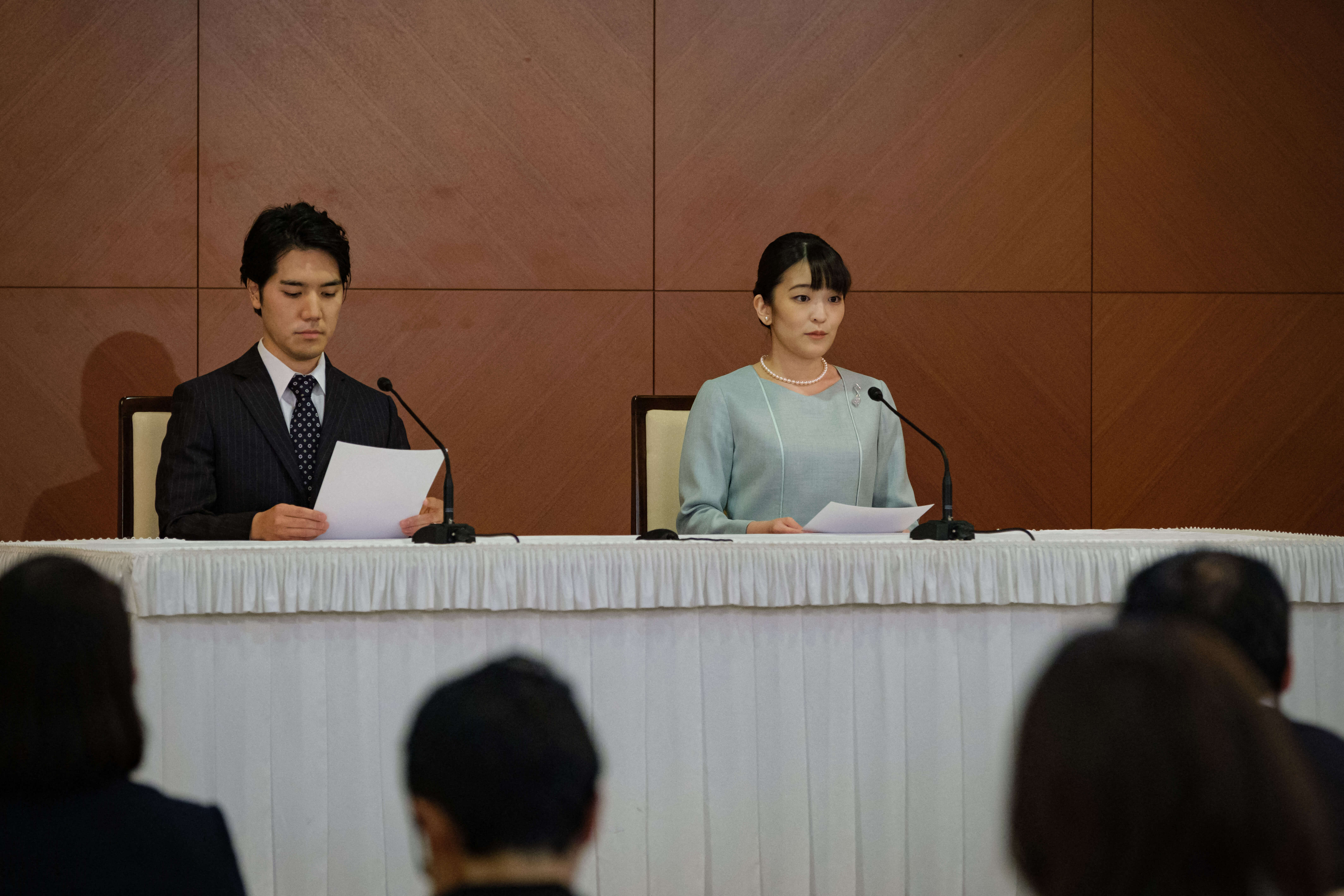 Japan’s former princess Mako (R), the elder daughter of Prince Akishino and Princess Kiko, and her husband Kei Komuro (L), who she originally met while at university, speak during a press conference to announce their marriage registration, at the Grand Arc Hotel in Tokyo on October 26, 2021. Source: Nicolas Datiche/Pool/ AFP

While Japanese media initially fawned over Komuro, pressure grew on the couple. The wedding was postponed and Komuro moved to New York for law school in 2018, a move seen as a bid to defuse negative attention. Mako said on Tuesday she had encouraged Komuro to “establish a life overseas”.

Members of the Imperial Family often enrol in the prestigious Gakushūin school system, where many of Japan’s elite families and “narikin” (nouveaux riches) send their children. Many go on to earn degrees from the Gakushuin University.

Around half of the adult Imperial Family members today, however, choose to go abroad — specifically, to the UK:

Naruhito was the first Japanese royal to study abroad as a “rite of passage,” spending 1983 to 1985 in Oxford. As he worked on his thesis entitled “A Study of Navigation and Traffic on the Upper Thames in the 18th Century,” he reportedly also learned about the UK’s famous pub scene — through experiential trips to the city’s many historic pubs including the Trout and White Hart in Wolvercote — and how to do laundry without flooding his entire student dorm.

When his Oxford stint ended, he reportedly vacationed with American student Keith George and his family in a quiet mountain town about two and a half hours by car outside of Charleston.

“His life would be totally different in Japan,” George told Kyoto News. “There was a certain sadness of losing the freedom that he had in the university, but at the same time he said he was gratefully accepting his duties.”

“He was prepared to assume his duty to be the crown prince and eventually the emperor — it was very clear.”

The ups and downs of the Japan travel ban ‘can get really depressing,’ says Indian student

Has University of the People proven the value of a 'free' online degree?

‘Our students are suffering’: Frustrations mount for students locked out of Japan