Master the art of musicianship at Baylor University School of Music

Growing up in Korçë, Albania –– often referred to as “a city of serenades” –– Fjoralba Zguro  was surrounded by artistic inspiration. As an infant, she tried to mimic every melody she heard. By toddlerhood, she was performing at family parties and various festivals around town. At the tender age of four, she was singing on national television — well enough to capture the attention of judges and the hearts of audiences. A year later, her love for playing the piano began to bloom. The next 12 years of her life were spent at a local music school.

Zguro knew, however, that at the higher education level, her passions needed to be nurtured with methods Albania’s musical institutions could not offer. “Since it’s a developing country, it focuses more on the economy and sciences — anything that could help Albanian families put food on their table,” she explains. “That said, music and the arts were secondary.”

The hard truth inspired Zguro to broaden her horizons with a bachelor’s degree abroad. The US was an obvious choice for its proven appreciation for music and the arts. In 2016, when she arrived in Texas, all signs led to Baylor University School of Music.

By joining this community of visionaries, she would be able to perform and interact with practising professionals, forge meaningful connections amidst a culturally rich student body, and find inspiration from a scenic campus. Plus, with the generous scholarship she was offered, Zguro would be able to fully immerse herself in the Baylor experience without a financial worry in mind.

Deep dive, she did. Zguro’s studies have been exploratory since they began –– as it is for every budding musician that chooses Baylor. For aspirants like Zguro, the school’s Division of Keyboard Studies encompasses majors in piano, piano pedagogy, collaborative piano, and organ. Undergraduate degrees offered range from Bachelor of Arts, Bachelor of Music Education, and Bachelor of Music. Zguro opted to pursue a Bachelor of Music in Piano Performance under Dr. Jani Parsons, a Lecturer in Piano. 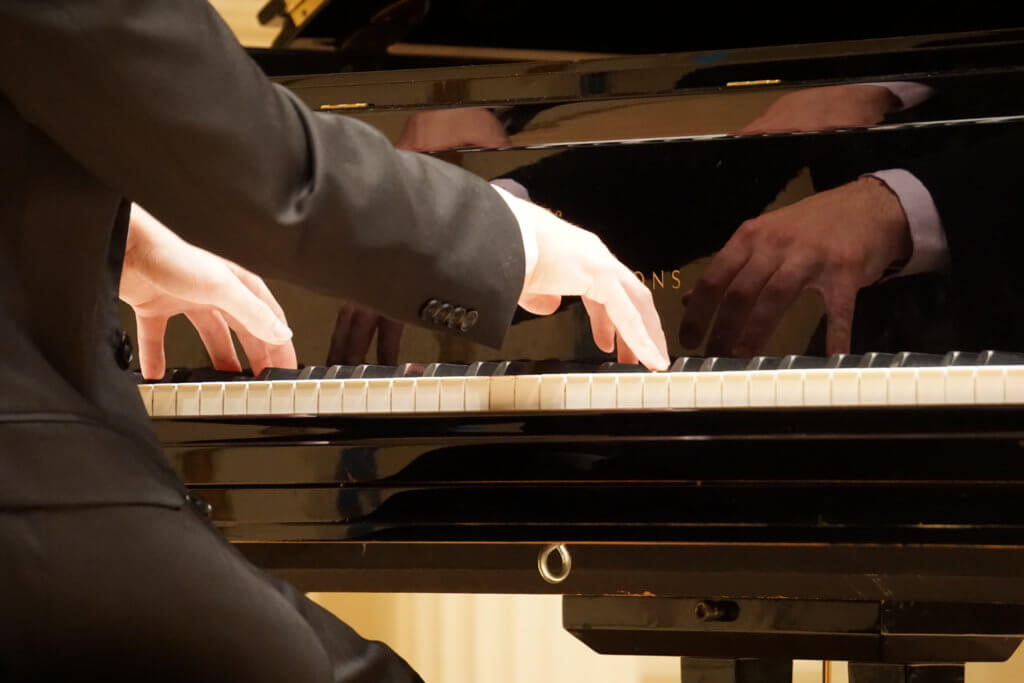 “Since the very beginning, I felt so comfortable and able to explore my full potential in her studio,” she enthuses. “She found a great balance between teaching and mentoring me to become a better musician and ultimately a better human being.”

Dr. Brian Marks was just as excellent. He facilitated lessons in piano literature and sight-reading –– both of which taught Zguro everything she knows today about the history and fundamentals of music. Piano pedagogy classes with Dr. Lesley McAllister were thought-provoking as well. Zguro learned from here what it truly takes to become a world-class piano teacher.

Together, Zguro and her educators trained on some of Baylor’s many excellent pianos — her favourite being the Getterman Hamburg Steinway Piano in Roxy Grove Hall. It wasn’t long until their collective efforts paid off. Earlier this year, Zguro won the Baylor Concerto Competition, which is open to all students at the School of Music. She played Maurice Ravel’s “Piano Concerto in G Major” — three movements heavily influenced by jazz.

“I entered this competition to satisfy a degree requirement, but it gave me so much more,” she explains. “I am not solely talking about the joy of winning. To me, this competition was never just a competition. It was an opportunity to share with the audience and the jury what I had loved practising for almost six months. I never expected to win, because all the competitors were such talented and hard-working musicians.”

Every pupil had their eye on the prize, but backstage, Zguro witnessed the exchange of several hugs and many pep talks. “It was amazing to watch,” she says. The “genuine, supportive atmosphere” made her experience all the more enjoyable.

It’s easy to thrive in a community that wants you to. Little wonder why the Baylor Symphony Orchestra and the A Capella Choir received The American Prize in the college/university category, under the direction of The Mary Franks Thompson Professor of Orchestral Studies, Conductor-in-Residence, and Director of Orchestral Activities, Stephen Heyde and Dr. Brian A. Schmidt respectively. The first-place win marks the first for the A Capella Choir and the fifth for the Baylor Symphony Orchestra in the last six years.

“For me, winning the award as consistently as we have over the past six years indicates that the programme has gained momentum and a reputation for excellence,” notes Heyde.

Thanks to this reputation, Baylor’s encouraging community and an endless array of accolade-racking opportunities, the self-assurance Zguro developed lives on today as a graduate student at Carnegie Mellon University.

“It is a different stage in my life, one where I have more opportunities to actually show what I learned at Baylor in terms of piano pedagogy, accompanying, and musicianship,” she says.

“Thus far, I have felt so prepared to take in all the different challenges that this stage brings into my life and I am very grateful to every one of my professors, friends, and family that have helped me get to where I am.”

3 US universities nurturing a new generation of musical visionaries

3 US universities nurturing a new generation of musical visionaries