Serena An, a recent graduate from Brookings High School, is a high-achieving, award-winning math whiz. It began from middle school when she joined the MATHCOUNTS competitions, then progressed to the Olympiads during high school. In between, she earned dozens of awards and accolades such as the Spirit of Ramanujan Talent Initiative, a grant worth US$5,000 that will help An pay for math summer programmes.

Soon, she’s set to join the Massachusetts Institute of Technology (MIT). First, however, she’s taking a gap year to do something a little different: learning Korean.

While An has the basic mastery of the language of science, engineering and technology —  her BHS geometry/AP calculus instructor, Pamela Zubke, says An “has accomplished phenomenal things in mathematics” — she’s excited to take her Korean skills to the next level. An will be part of the National Security Language Initiative For Youth (NSLI-Y) programme, launched by the US Department of State in 2006 to promote critical language learning among American youth. 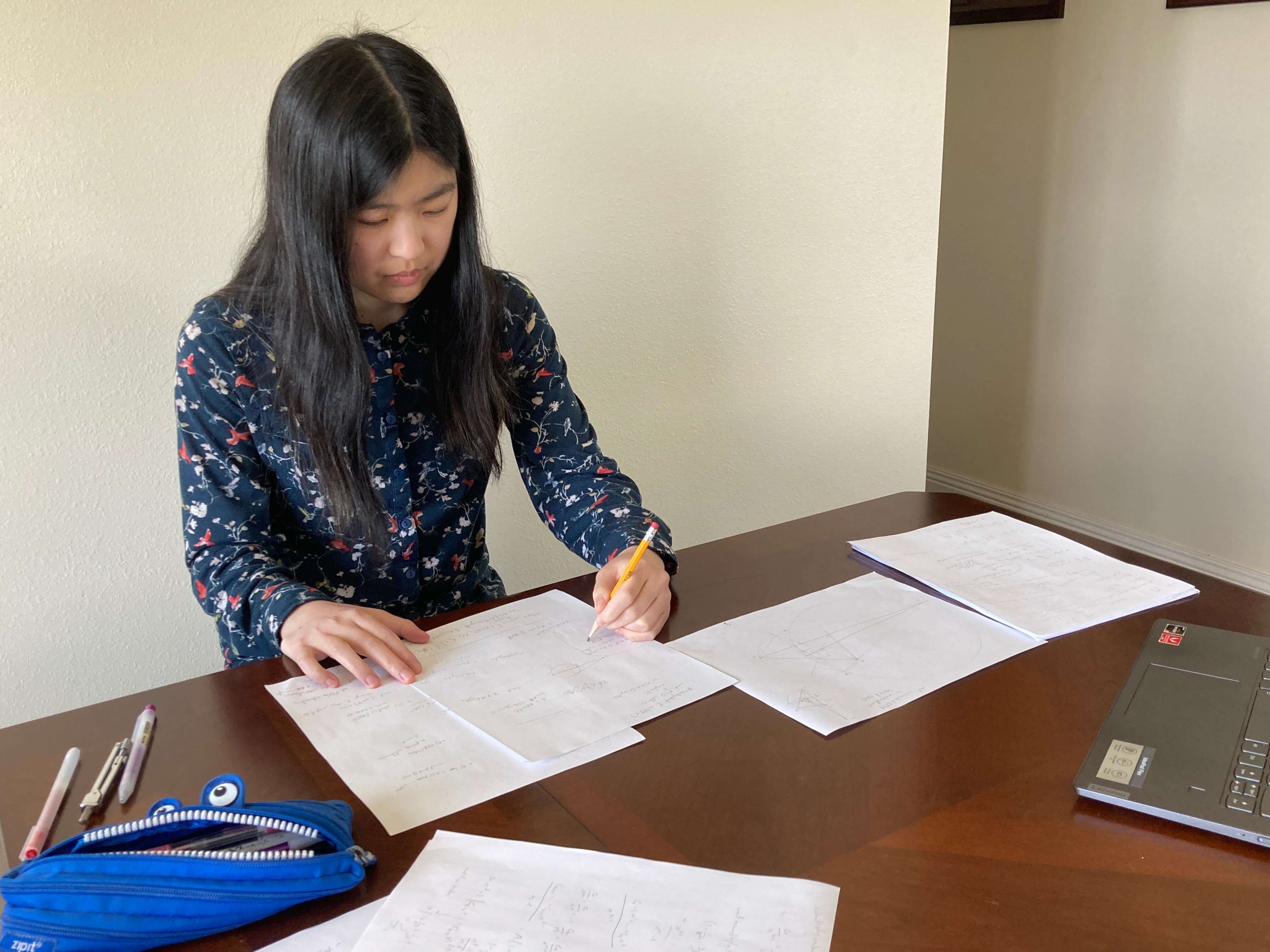 One of An’s teacher says, “has accomplished phenomenal things in mathematics.” Source: Serena An

We caught up with the 18-year old to learn more about how her affinity for math began and why she’s drawn to the Korean language:

What’s the importance of learning the Korean language under the NSLI-Y programme? What are you looking forward to?

I really enjoy learning Korean and have been studying it for almost two years. I always feel satisfied whenever I memorise a new batch of vocabulary or being able to understand and apply a new grammar point.

I also am able to apply some of my Chinese knowledge to help remember words that are derived from Chinese characters. It’s usually hard for me to sense my progress but I try to be as thorough as possible when learning, memorising and reviewing.

I have been primarily using this website which I really appreciate for its detailed explanations and examples for each grammar point. I’m definitely looking forward to the programme and being able to apply everything that I learn to my daily life.

Am also looking forward to bonding with my host family and experiencing a different culture. Also, the food (as I’ve seen from blogs of past NSLI-Y participants) looks amazing! I think just being in a big city will be fun with lots of things to explore — a difference from my small hometown. 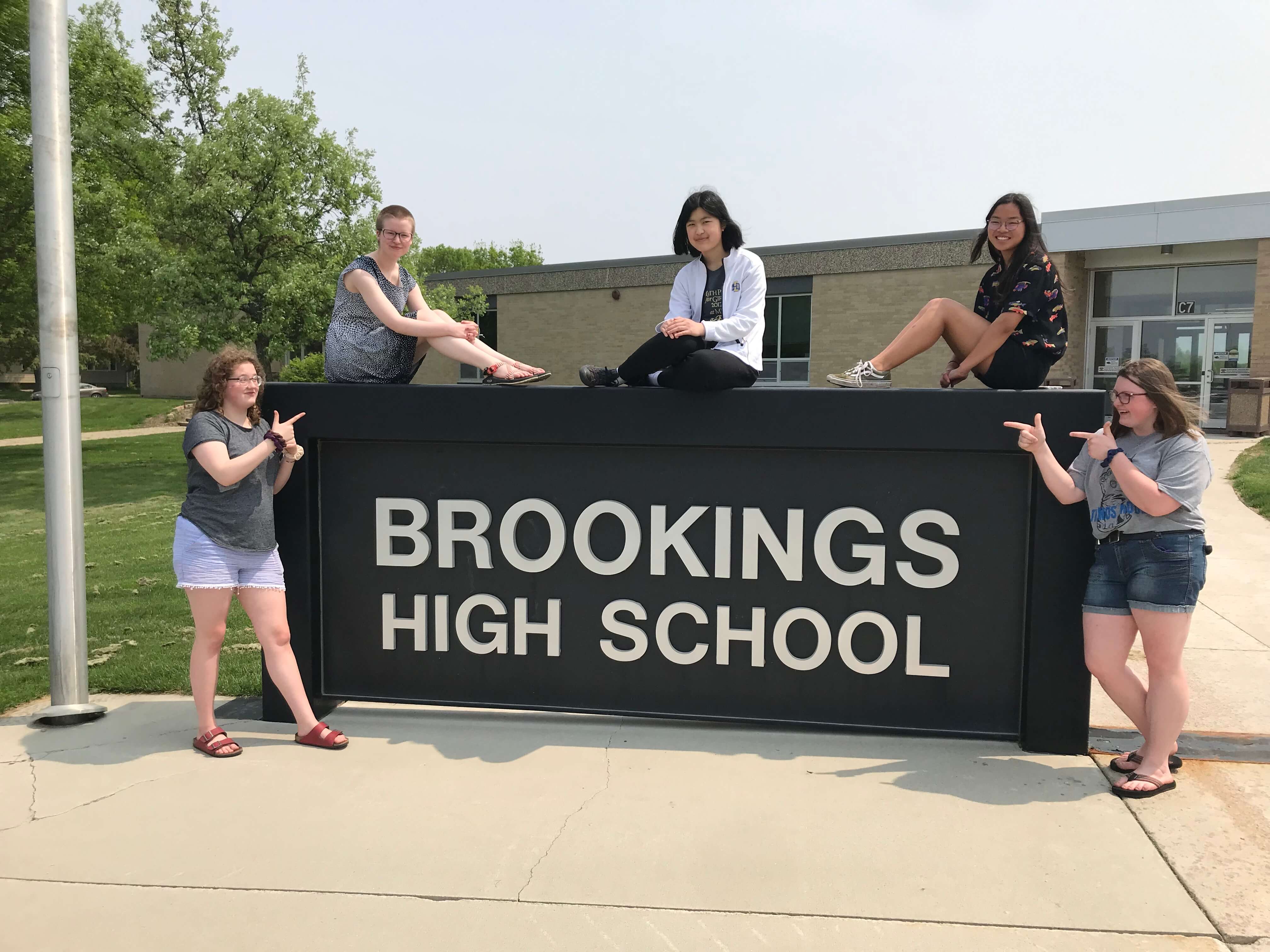 An will join the Massachusetts Institute of Technology (MIT) soon. Source: Serena An

Although NSLI-Y students only attend their high schools part-time, I’m excited to attend. My Korean is currently far from the level at which I would be able to follow a class so I still want to participate as much as I can and interact with my classmates. I’m sure I’ll learn a lot from the classroom.

One of my main goals is to become as proficient in Korean as I can. This NSLI-Y gap year will probably be my best chance to do so and include a cultural immersion. I don’t really have a clear idea of what I want to do in the future yet and whether it will even involve Korean or not but I am currently enjoying studying it.

Where does your passion for math stem from?

In sixth grade, I joined my school’s MATHCOUNTS team. This was my first exposure to contest math which I found really fun since it usually required clever problem solving. I also saw other people on the team who were very good at math and wanted to be like them. 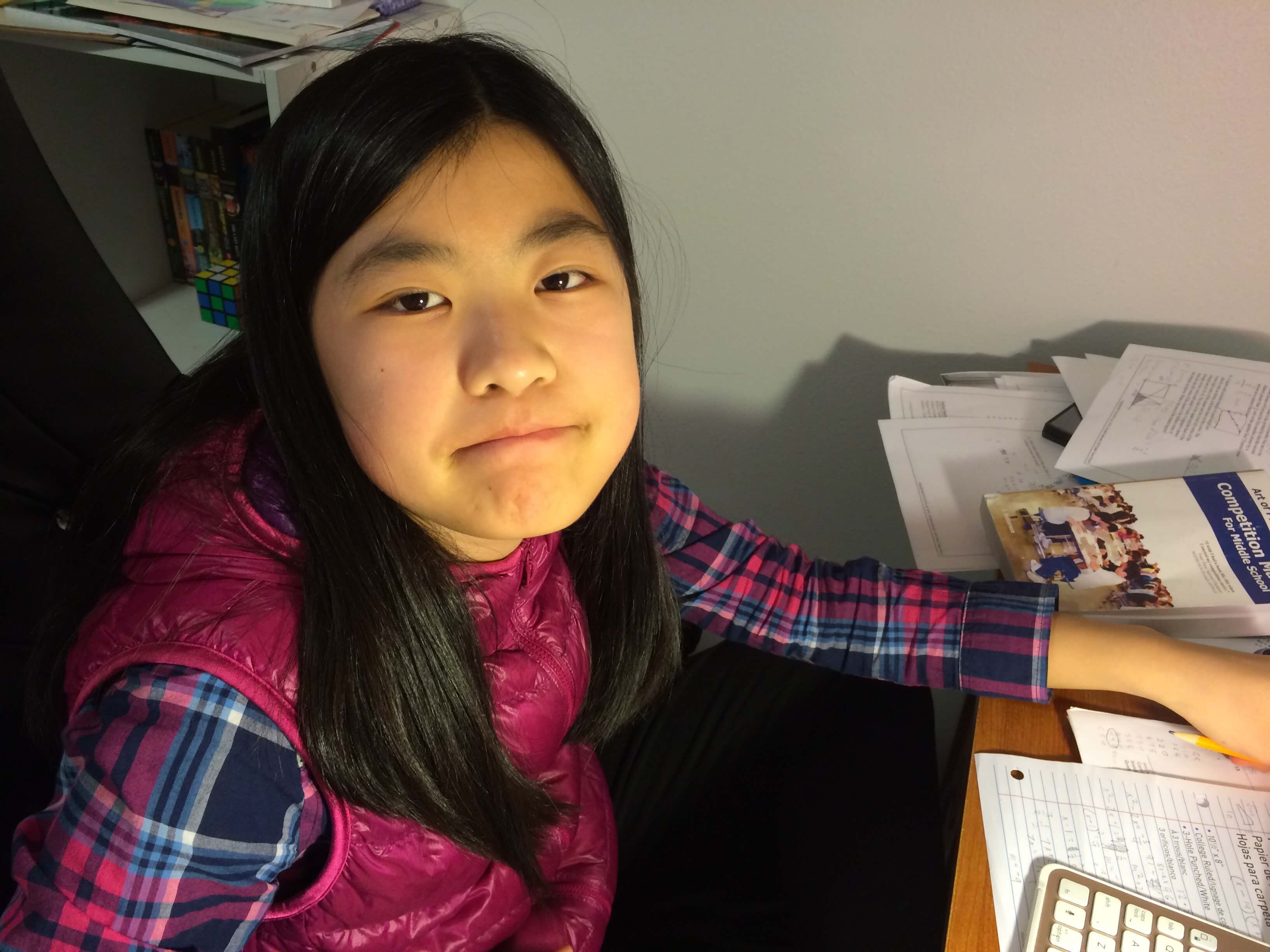 “I spent a lot of middle school preparing for MATHCOUNTS competitions by doing past contests and working through textbooks,” An says. Source: Serena An

So I spent a lot of middle school preparing for MATHCOUNTS competitions by doing past contests and working through textbooks. In high school, I started to focus more on Olympiad (proof-based) math. Most Olympiads have three problems (in increasing difficulty) in about four hours.

A lot of my practice was doing problem after problem to become more familiar with ideas and solution paths to relate to problems I might encounter later. I definitely wouldn’t have imagined to be at where I was at the end of high school when I was in middle school. I would say I just constantly aimed for the next highest level when moving through competition series.

Tell us about your math competitions. Is there one that stands out for you? Are there any rituals you do to help you focus?

I try to not think about others when I’m competing and somewhat treat it as a test against myself to see how well I can do. Also, I find that if I’m nervous before a contest it usually goes away once I start working on the problems.

The Math Olympiad Summer Programme (MOP) which I was invited to last year and the year before, scheduled Olympiads every other day for three weeks. This really helped me become more familiar with Olympiads and make them less daunting. I drink water, eat snacks and take occasional walking breaks which all help me stay focused.

A memorable competition for me was Math Prize for Girls (MPfG) in 2019. It was during the fall of my sophomore year and the best part of it was reuniting and spending time with math friends.

In addition to that, this was the first time that I did well on a larger-scale competition (sixth place) and was meaningful because I had not done much math during ninth grade. I didn’t achieve my goal in qualifying for the US Junior Math Olympiad so I started to study more during the summer.

Any particular reason you chose MIT?

I knew about MIT from some older math friends who go there. From participating in the on-campus math competitions (MPfG and Harvard MIT Math Tournament), I felt like I would belong in the MIT culture and its large math community. So, MIT was my top choice when applying to colleges last fall. 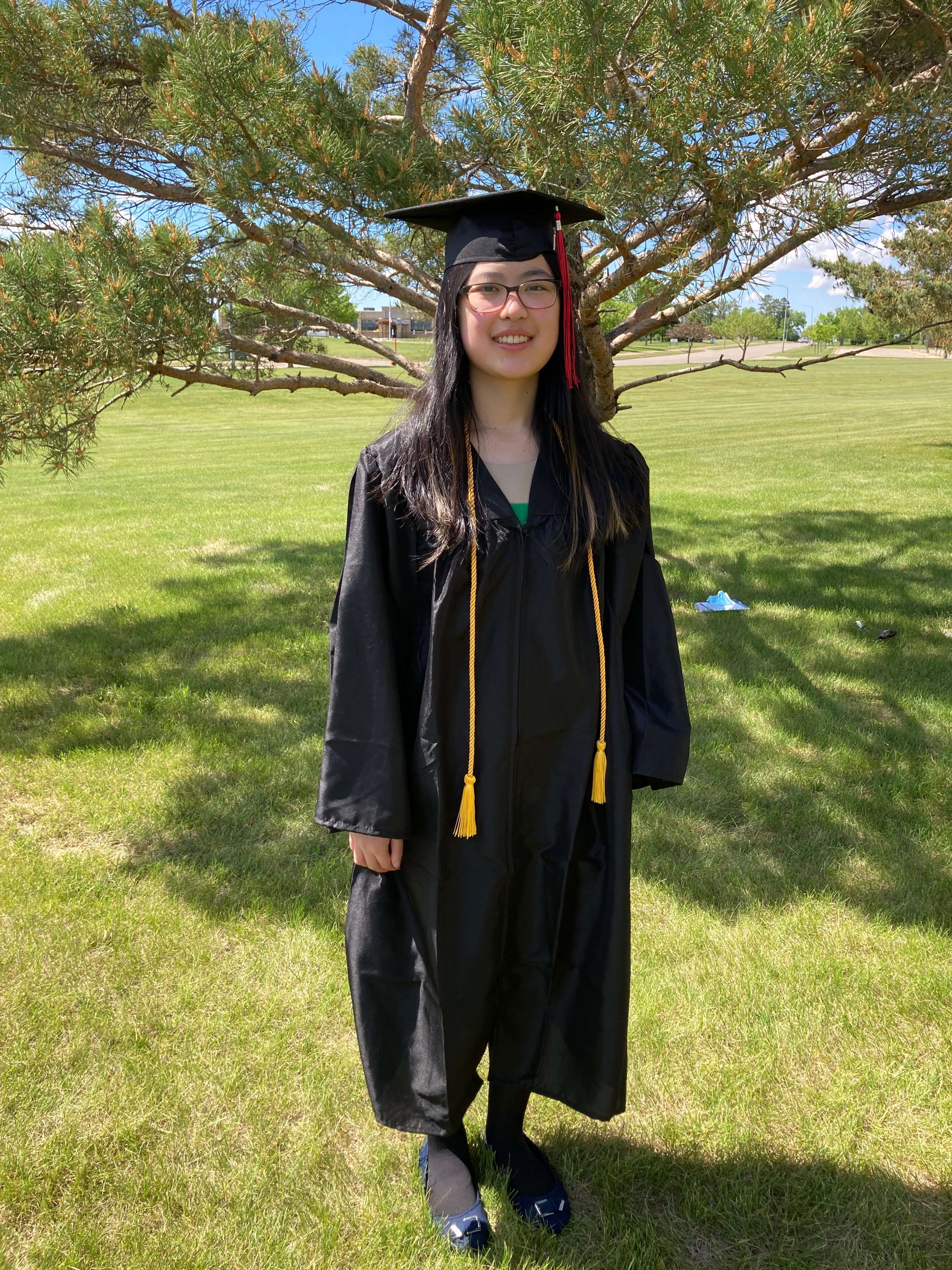 Serena An aims “to become as proficient in Korean” as she can and to fully enjoy the cultural experience of her NSLI-Y programme in South Korea. Source: Serena An

Tell us more about Brookings Math Circle, something you co-founded.

I started my blog on a math website: Art of Problem Solving (AoPS) for fun five years ago and I usually post a few times a month about math-related and other things. When I participated in the Canada/US Mathcamp and the Math Olympiad Programme, I wrote daily entries about my experiences there. This was a way for me to share and connect with others in the AoPS community. I always enjoy talking to others through the comments and reading other blogs.

I then co-founded the Brookings Math Circle (BMC) with one of my friends five summers ago. Running BMC has been a different experience every summer as we build upon what worked and didn’t work in the past.

For the first two years it was more like a study group where we came up with topics, wrote handouts and presented them. Since then, we’ve started focusing on MATHCOUNTS preparation including fun contest math-adjacent topics.

The people who participate in the Brookings Math Circle are usually rising sixth to ninth graders. Last year we taught over Zoom which was difficult because everyone was less responsive with the additional work. To add to that, problems like needing to unmute, turn on cameras, type in the chat and ask questions were also challenging.

Where do you see yourself in 10 years?

No idea at this point! I might pursue graduate studies or be working. I might do something related to math or languages but I’m also open to anything else. I’m sure my NSLI-Y and college experiences will help me figure out what I want to pursue in the future.

What will you miss from home when you’re abroad and how are you planning to substitute it?

One thing from home I know I’ll miss is the Chinese food that my parents and grandparents make but I’m sure I will like the food in South Korea. Also, I’m anticipating many language barrier challenges like being misunderstood, not knowing the right thing to say or having difficulty reading quickly and comprehending speech. I know that I will have to think a lot every day just to communicate.

From Tanzania to Indiana: One high schooler's dream to reach the Ivy League