US schools are on a mad scramble transitioning to remote learning once again as plans for reopenings are stalled following a new wave of Omicron-related infections in several states. On Monday, the US reached a global record of one million cases to its COVID-19 tally following a surge during the holiday period, Bloomberg reports.

In several districts, the switch to remote learning has upended work and child care arrangements for families who are at the receiving end of the short-notice transition. “I’ve been really disappointed and frustrated in the lack of communication and the lack of clear planning,” Anna Beale Smith, a mother of two in Atlanta, was quoted saying.

American children are starting 2022 in crisis.

I’m not sure that many people fully grasp the depth of it.

Schools in other major US cities including Detroit, Cleveland and Milwaukee have either moved to virtual learning or cancelled in-person classes altogether due to the rising number of cases and staff shortages, according to Reuters. New Jersey, which has one of the highest case rates recorded in the last few weeks, have also followed suit with online learning.

The remote learning crisis that US public schools are facing has prompted parents to seek other education alternatives. For some, independent schools provide the ideal solution to their predicament, citing greater learning flexibility, smaller classes, and greater autonomy as primary reasons for the move.

Remote learning in US schools: How private schools are winning 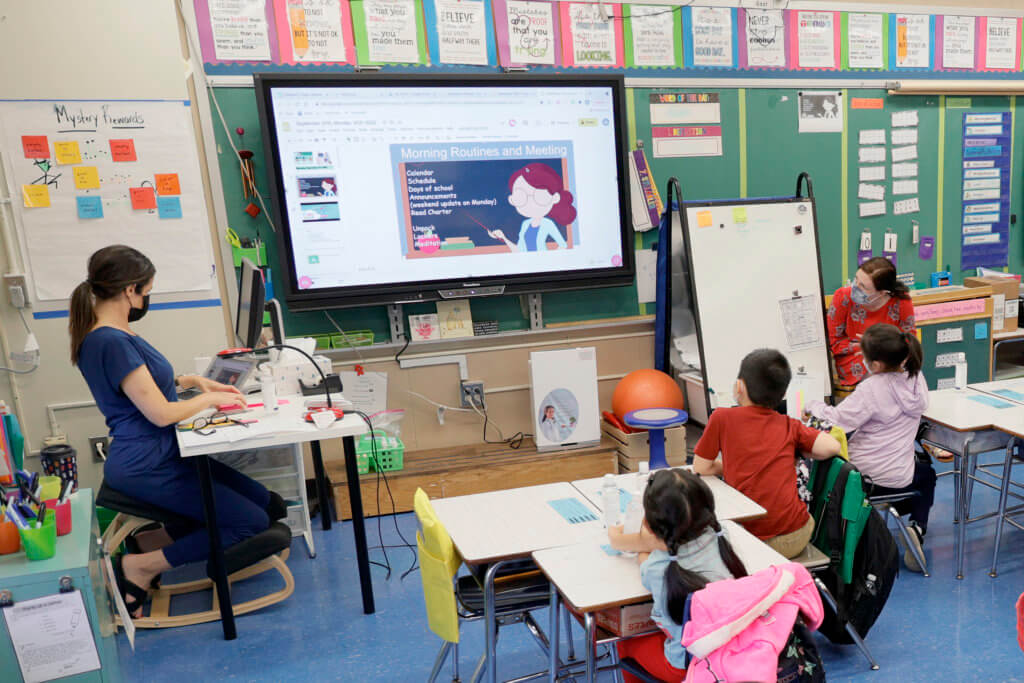 Independent schools in the US are seeing an increase in enrolment numbers throughout the pandemic. Some are concerned that the move would widen educational inequities even further for low-income households. Source: Michael loccisano / Getty Images via AFP

The decision to switch to virtual lessons once more isn’t unanimous. In Chicago schools, for instance, mayor Lori Lightfoot has cancelled schools entirely, drawing the ire of the Chicago Teachers Union. Both sides have been at a standstill over disagreements on how to keep schools open, the New York Times reports. The Union had been pushing for a move to remote learning due to concerns over COVID-19 transmissions in schools.

In New York, schools will remain open despite a worrying surge that sees one in three positive COVID-19 test results over the past week. “We want to be extremely clear: the safest place for our children is in a school building,” Eric Adams, newly sworn-in New York City, was quoted saying.

Reactions from parents and caregivers have been mixed on both ends. “I understand they want to be safe, but I have to work,” Tonya Patterson, a parent in Chicago, was reported saying.

While I think their intentions are good, the folks (almost always non-educators) arguing “schools can open safely if they do these 17 things (that our society absolutely won’t do/pay for)” are really demonstrating their misunderstanding of how schools and society in the US work.

My daughter is so worried that she won’t be able to go back to school. As a parent, I’m not entirely sure what to do. I know many parents & children are in the same boat right now. I’m so upset at this govt for lying to us that schools will be the last to close & first to open.

The dissatisfaction with how pandemic schooling is handled have pushed some parents to make the switch to independent schools. Enrolment in US private schools have increased during the pandemic, spurred by school schedules that included in-person learning. More parents are realising educational options available for their children, and the switch to independent schools is motivated by quality.

According to a survey, around 41% of parents would opt for private education for their children post-pandemic. Cindy Chainin, an education expert, was quoted saying that parents who have switched their children to private K-12 education would likely stick to their decision. This is due to the advanced facilities, learning technology, and a more personalised curriculum that makes for better learning engagement.

Equipped with better technology, independent schools fared better with hybrid and online learning. The Chicago Jewish Day School, for example, has over four hours of daily live instructions that include yoga, art, music, and fun baking classes and fun baking projects over Zoom.

“I just want her to have consistency,” Colleen Ganjian, who transferred her daughter to a private Catholic institution from a public school, was quoted saying. “The bottom line is I am so busy. I own a business, and I can’t be that person,” she adds. “That’s kind of why I feel I needed to look for an alternative.”

Of course, private schools also come with a hefty price tag. The enrolment uptick in independent schools will exacerbate education inequality further in the US.

“Schools are highly unequal. But the ability of families to provide education is even more unequal,” Richard Kahlenberg, director of K-12 equity at The Century Foundation, was quoted saying to TIME magazine.

Building trust among parents and teachers is key to reopening schools

US unis change Spring term plans due to Omicron spike

As the Omicron variant hits US and Canada, universities move to virtual learning once more