‘Unfair to keep us in the dark’: International students campaign for their return to Australia

Many international students want the sterling credentials of an Australian degree, but their inability to return to Australia amid the pandemic is making this goal more unattainable by the day. Flip-flopping government announcements have left students stranded abroad high and dry — state premiers have floated proposals to bring international students back to Australia, only to later announce that they’ve been put on hold. Remote students have complained about the poor quality of online learning and wish to return to face-to-face learning as soon as possible.

Since last December, Voice of International Students Australia (VoISA) has been working with affected students to “sensitise the Australian government to the plight of international students stuck offshore.” On March 3, 2021, they plan to create a Twitter firestorm ahead of the upcoming cabinet meeting taking place two days later to ensure their issue gets the attention it deserves. 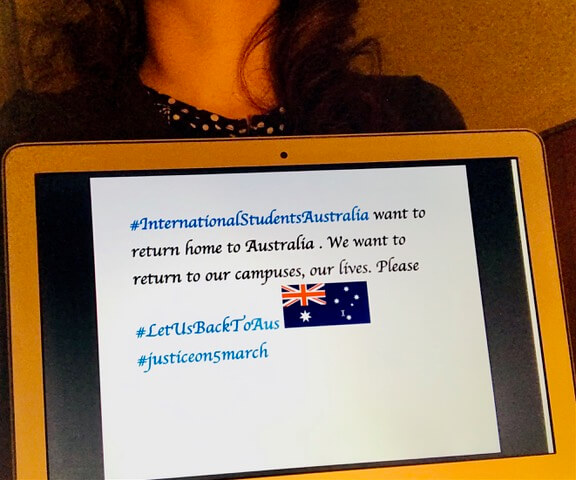 “Our main objective is to raise our voice to what we believe is our right to education, and our right to enter Australia to study on our campuses,” explains one VoISA member, who only wanted to be known as Amna, to Study International via email. “We refrain from posting any derogatory content against Australia or the Australian government and only hope for them to resolve our matter justly.”

The Pakistani student, who is pursuing her PhD at a university in Melbourne, said the team had been involved in providing input to the petitioner who submitted petition EN2217 (a petition addressed to the House of Representatives calling for their exemption from Australia’s COVID-19 travel border restrictions), in addition to sending out collective emails to MPs and universities to seek support for their return to Australia, and approaching reporters for media coverage.

Some students are planning to treat the outcome of the March 5 meeting as the last straw — unless there is positive news about their return to Australia, they plan to transfer to universities in Canada or the UK. 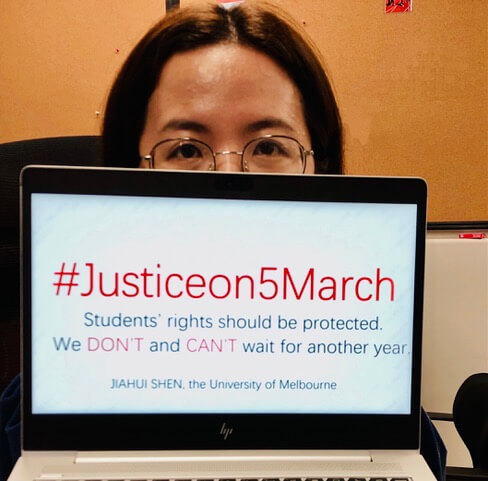 VoISA wants to galvanise the government to share plans for international students’ safe and gradual return to Australia through a Twitter campaign. Source: VoISA

While VoISA comprises a core group of seven students, the 28-year-old said they “represent and work together with the larger student community.” Their current agenda is to trend the following hashtags on March 3: #LetUsBackToAus, #Justiceon5March, #LetAusPhDStudentsEnter, #extend485visas and #InternationalStudentsAustralia, to remind the government to address their situation in the upcoming cabinet meeting. These students are also hoping for a clear message from the Commonwealth Government about their return to Australia.

“It has been a year since the travel restrictions were placed,” shares Amna. “During this past year, the government has not announced any tentative timelines or shared any plans for our safe and gradual return to Australian universities. It is as if there is no political will to change the status quo. We understand the pandemic has made it hard for the government to make such decisions, but thousands of human lives are involved. There should be some progress on this front, especially now as the vaccine rollout has begun earlier this week.” 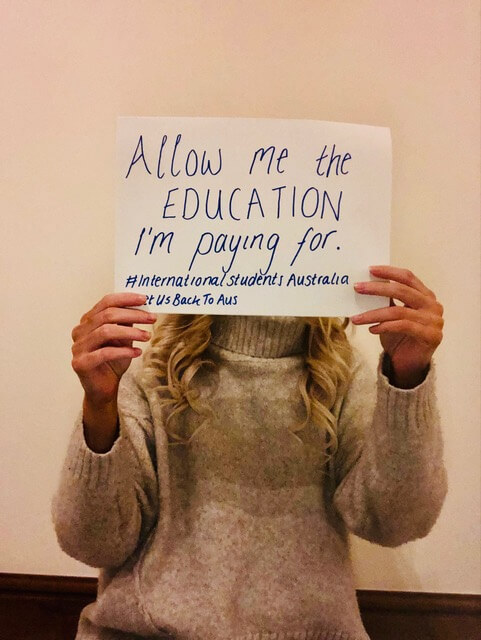 Danielle, from England, is a law student who cannot study online. If borders remain closed in June, she would have to defer her course until January 2022, fuelling plenty of uncertainty over her future. Source: VoISA

Reports about the poor quality of online learning are rife, and members of VoISA have personally encountered this. Postgraduate student Jiahui Shen struggled with the time zone difference between China and Australia while studying online. She is pursuing a Master of TESOL degree and asserts that the quality of her video lessons is unimpressive and offers little value for money. Her teachers frequently use YouTube videos as teaching materials, and Shen resents not being able to get involved in cross-cultural exchange by learning on-campus.

Iranian student Nina was due to start her PhD in biomedical sciences but was unable to commence her PhD offshore as her university disallows students from Iran to commence their doctorates online due to sanctions by the United Nations Security Council (UNSC), as well as Australia’s own autonomous sanctions. Saad from Pakistan is a graduate student on visa subclass 485. He has invested four years of his life studying in Australia, but he’s now “facing his worst nightmare” as the government isn’t extending his visa while he is stuck offshore.

Eva and Amna have been forced to work on their PhDs online this semester. Eva, from Norway, is studying the mathematical modelling of financial crashes while Amna is studying the economic resilience of Australia. “Our studies can benefit the Australian economy and the Australian community, in general, yet we have no certainty about returning to our campuses,” said Amna.

Another student, Viviana from Colombia, is studying English and recently learned that her language institute at the Gold Coast has closed for business, and is forced to find a new institute to complete her course. “Her partner of 10 years is stuck in Australia, completing his master’s degree, while she is living with her parents in Colombia since February 2020,” said Amna.

‘Unfair to keep us in the dark for another year’ 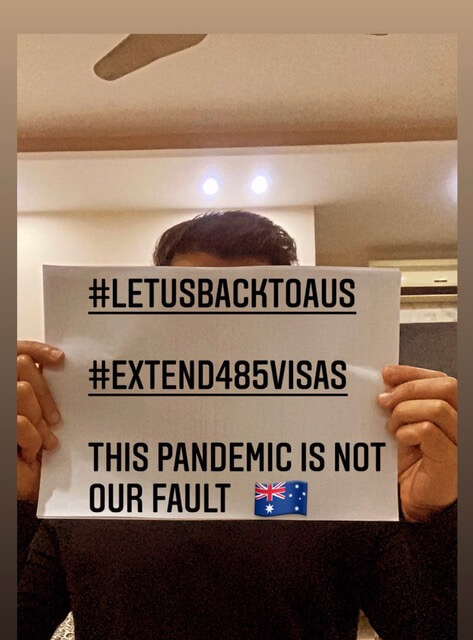 Remote learning is rife with challenges for students of different nationalities. Source: VoISA

Australia’s borders may stay closed to international travel until 2022, and Amna said most of the students VoISA spoke to are planning to move to student-friendlier destinations such as Canada or the UK if the March meeting does not offer any solace. “We think that it is unfair to keep us in the dark for another year. Our lives have been put on hold and we cannot continue to live with this uncertainty for another 12 or so months,” she said.

Students told VoISA that they are willing to pay for their quarantine and are also happy to get tested before departure from their home countries and upon arrival in Australia on their personal expenses. “There has been news about the offer made by student accommodation providers to provide quarantine facilities to students. However, no updates on the matter have been given as yet,” said Amna. “If the government can organise the arrival of sportspersons, celebrities and cheap labour, then why would they not make any efforts to facilitate their 40 billion Australian dollar sector and bring back their international students?”

International students will get COVID-19 vaccine for free in Australia