Return to China for international students: Latest updates for November 2021

Desperation and unease mount as pleas for details on the return to China for international students are left largely unheeded. The country’s zero-COVID policy has kept most foreigners out of its borders since its closure in March 2020.

For more than half a million foreign students stranded abroad, the situation has been grim, without the benefit of physical classes and clear indication of return. According to The Economist, the country is unlikely to ease border shutdown until 2022, with strict quarantine measures likely to remain in place.

Students have been vocal in raising frustrations on Twitter via hashtags like #TakeStudentsBacktoChina and #TakeUsBacktoChina to air their concerns, even so far as to stage demonstrations in an attempt to re-enter the country.

According to SCMP, only students from South Korea have been granted visas into China after both countries agreed to resume issuing them in July last year.

At the time of writing, two universities have recently announced the possibility for students to return to China, but what about the rest? Here’s what we know so far:

Two campuses hint at return to China for international students

Duke Kunshan University (DKU) and New York University in Shanghai have reportedly sent out emails to students that they could be allowed to return for the next semester.

DKU’s email addresses parents and students, advising them to complete vaccinations and visa preparations, according to SCMP. 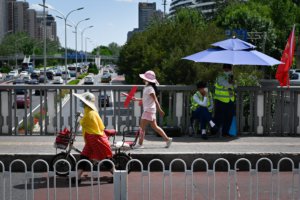 DKU is closely monitoring the situation as it develops, and states that a “detailed plan” to facilitate re-entry for foreign students into the Chinese mainland is underway, according to the email posted on Twitter by a reporter for The Chronicle, Duke University’s student newspaper.

David Pe, the dean of students at NYU Shanghai, has also issued a similar email to its international students saying that the university is confident they would be able to attend campus next semester.

He encourages them to work with academic advisors for class registration, vaccinations and getting direct flights. However, students will be required to complete a 21-day quarantine before the end of January.

The advice has been confirmed by an overseas student officer at the university, but no dates were indicated so far for that to happen, SCMP reports.

Other Chinese universities are unaware of any such plans for international students to be allowed into the country.

Uncertainties loom ahead for many, with doubts over online qualifications

When asked about ease in international travel restrictions into China, Foreign Ministry Spokesperson Wang Wenbin was quoted saying that it “will continue taking prevention and control measures through scientific analysis in light of the evolving situation” in a press conference last week, but gave no indication of relaxing its zero-COVID policy.

Students affected are still in the dark about what this means for their immediate study plans. For medical students in Pakistan barred from entering China, online learning could put their future prospects on hold.

The Pakistan Medical Commission has recently clarified on Twitter that it will not recognize any undergraduate or postgraduate qualification obtained through online teaching.

“What nonsense is this?  Are we not protesting since March 2020 to send us back to China or our respective institutions?  So how can we go back to China when the Chinese government isn’t allowing us?” a medical student replies.

“We are not attending online classes with our consent. It has been two years and counting and we haven’t gone back to China,” says another.

Online classes pose difficulties for students in STEM, which require lab work and practicum experience to supplement their textbook knowledge.

The absence of in-person instructions has adversely affected their learning, and many are unsure if their qualifications will be accepted in their home country.

Meanwhile, scholarship recipients who are not in China claimed to have ceased receiving their monthly stipends.

When can international students return to China?