Nishtha Satyam is currently the youngest Deputy Country Representative for United Nations Women (UN Women_ — an entity championing gender equality and women’s empowerment. Since 2018, she has been leading the Multi-Country Office (MCO) in India, one of the largest and most strategic offices for UN Women. Over 40 thematic and operational experts report to her. Under her tenure, she’s expanded the MCO more than twice in its footprint programming portfolio across India, Bhutan, Sri Lanka and the Maldives. It’s no small feat and she credits her time studying abroad for her ability to see things from different perspectives and confidence to stand up for gender equality in one of the world’s most dangerous countries for women.

It was by studying abroad that led to her gaining work experience at KPMG (an Anglo-Dutch multinational professional services network and one of the Big Four accounting organisations) and American Express as an economist, prior to joining the UN. The University of Nottingham, Malaysia graduate is also the author of several studies on the business value of inclusion. We caught up with her via email to find out what she’s up to these days, her Master in International Business and why she would recommend studying abroad to everyone:

How do you think studying abroad helped you with your career trajectory now?

I was studying abroad 10 years ago. That helped me take the next step in working with one of the Big Fours in KPMG. They were looking for someone with a Master in International Business, so I think it definitely helped me there. Studying abroad gave me a business perspective that I didn’t have after an economics degree. That kind of shift into working with the government and the CEO’s office eventually led to my path in the UN.

Can you tell us more about your career trajectory since graduating?

I had a job with KPMG for about four and a half years handling the market section, which is looking at consulting firms and markets they engage in. It also included marketing sales.

I then started working in the economics analysis division and then started leading it. After working with KPMG, I came onto the private sector partnership to UN Women, and then worked my way up to Deputy Country Representative. Some of it is planned, some of it is correlated, and some of it is just grew from what you’ve planted.

What were some of the things you loved about studying abroad?

Studying abroad gave me the exposure to work in a very multicultural and international environment. My time at the University of Nottingham, Malaysia was my first time out as a student, and led to me meeting people from different places. In my opinion, more than just the education I received, it gave me the ability to question my own cultural biases and to see how similar people were across the borders. I think that is the greatest lesson.

In consequence, it was easier for me to work in UN’s multicultural environment. India is also very culturally diverse, so the greatest informal learning about my studies abroad were the confidence-building measures. I was staying by myself in a country I didn’t know very well, yet I still managed to find friends and interact with people from all over the world. This gave me an expansion of my worldview because you can’t learn that from books. 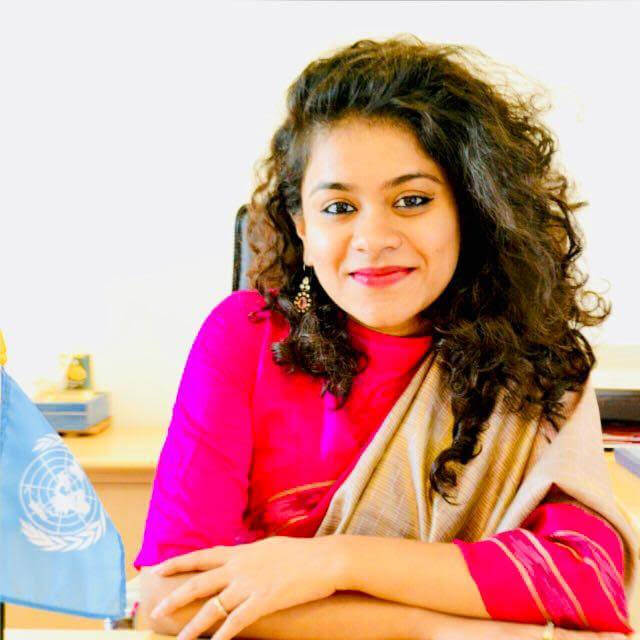 On the subject of being away from home, what is one thing that you missed and how did you substitute it?

I think what a lot of students miss when they are studying abroad is food from back home. However, Malaysia is such a wonderful place with a rich culture that gave me insight on what that part of the world meant. Nothing substitutes food from back home, it was just about finding different ways to get through this and find a certain sustainability. I think it was a place where students from all over the country and world were welcomed, which to me was very heartwarming.

What are some of the skills and knowledge you wished you learned more of during your time studying abroad?

From a skills and knowledge perspective, I did invest a lot of time in understanding foreign direct investments which was what my thesis was on. Perhaps I could have invested in that a little more because at the time it was very fixed.

In your role as a Deputy Country Representative for UN Women, what challenges do you face and how do you overcome them?

I think the greatest challenge to work on is patriarchy itself. It’s about mindsets and reaching out to the hearts of people, in particular, the ones who make policies. There is no universal tried-and-tested way of doing this, which is a great challenge to find ways that lead to sustainable change.

The realisation that we’ve had, even during this pandemic, is that change is very reversible, depending upon who’s at the helm of affairs. The second challenge is to really find more ways for women to be in leadership roles, because I think the world will never change if there aren’t.

What advice do you have for students planning to study abroad?

My advice is that there is a lot of merit in stepping outside home. Studying abroad is a very confidence-boosting exercise. I think it gives you the boost you need, the challenge and opportunity to prove yourself an independent person, and broaden your perspective on the worldview. Read as many books as you can. When you meet someone from another country, acknowledge their culture and their history. Your horizon will expand from this.

Several of my friends from the University of Nottingham are Pakistani and happen to be my best friends. We haven’t had the opportunity to meet each other in the last 15 years, but we are constantly in touch and asking about each other. That is the greatest wealth studying abroad gave me.

What plans do you have for the future? Do you plan to remain in India?

I think there was a point in time when I was obsessed about staying in India, but now I do feel like going abroad. Malaysia was one of my favourite countries and I would love to go back and explore new boundaries. There was a culture of talking about gender issues, socially and politically. Understanding the different risk factors in this would be immensely helpful to me.

What it takes to become Australia’s first woman astronaut

How an EdD candidate won a Fulbright scholarship to Greece

'Bigger picture': Why this Pakistani chose to study political science in Kazakhstan

From Canada to the UK, this law graduate is using his law degree for the greater good