Swiss kids suit up for ‘Mission to Mars’

Leo pulls on a shiny, silver suit and places the helmet gingerly over his head before marching with the other budding astronauts towards their spaceship. “Going to Mars is really my dream,” the eight-year-old said, jumping excitedly from foot to foot.

While the world has been riveted by the escapades of NASA’s Perseverance Mars rover, a group of Swiss primary school children has been eagerly preparing their own mission to the red planet. Some of Switzerland’s top space experts, including the country’s only astronaut, Claude Nicollier, evaluated the detailed mission plan the children had developed over nine months.

And on March 8, they gave it the all-clear for lift-off.  The children “exploded with joy” when they heard, their teacher at the Vivalys private school near Lausanne, Sebastien Roussel, told AFP. “It was like watching the NASA engineers’ ecstatic reaction when Perseverance touched down.”

This week, they finally blasted off. Their rocket is actually a bus, with images of astronauts astride a spaceship heading towards a bright red sphere covering the windows, flanked by the message: “Mission Vivalys. Direction Mars.”

Their destination? A Mars space station conveniently situated a bus-ride away in a secluded wooded area on the outskirts of Lausanne in western Switzerland.

Here, the 16 eight- and nine-year-olds will spend three days carrying out experiments similar to some conducted by actual astronauts, including attempting to grow plants to sustain them on the long journey. And while the idyllic, snow-sprinkled surroundings are far less hostile than the windswept, dusty surface of Mars, the children wear suits and helmets whenever they step outside. 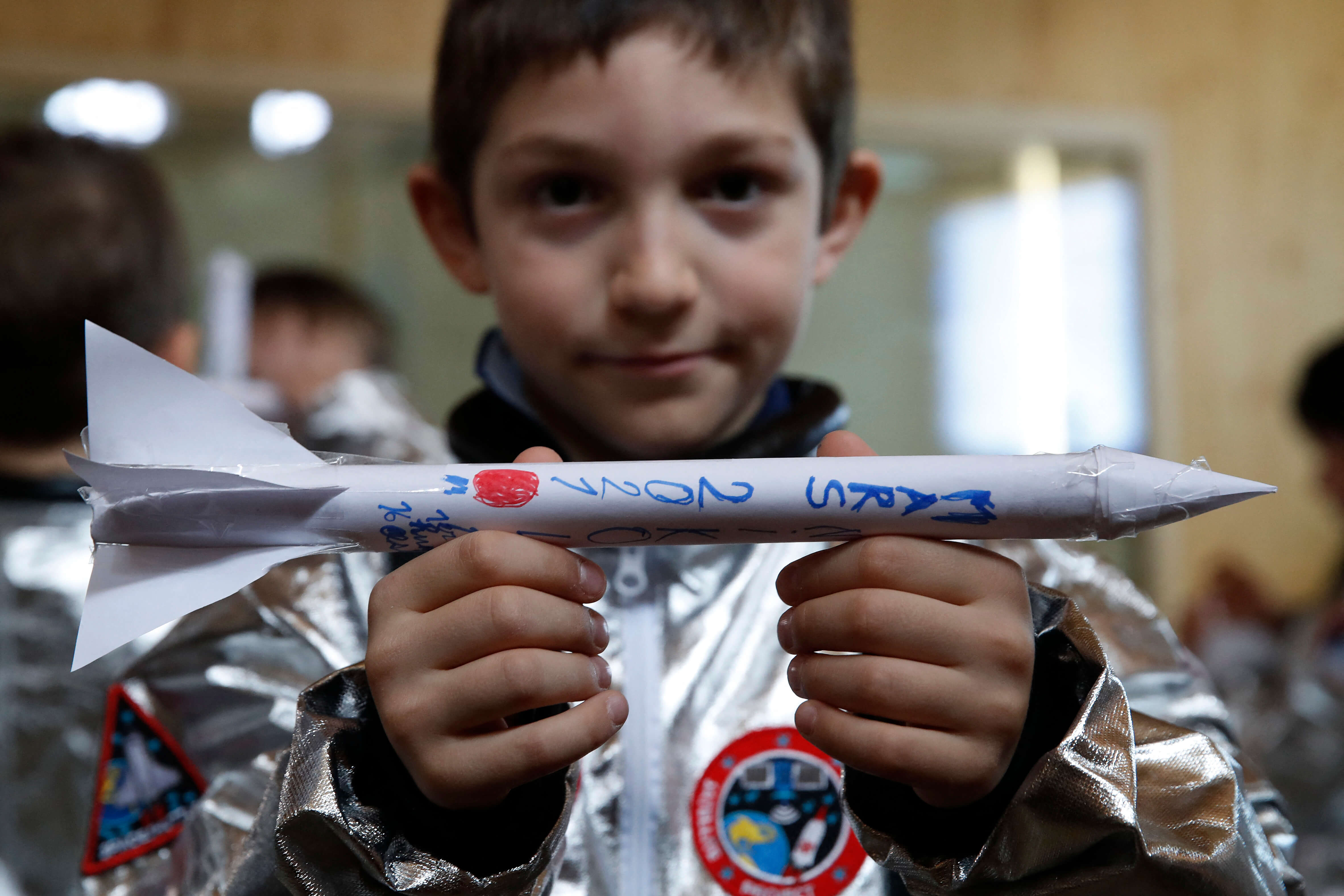 A pupil of the Ecole Vivalys elementary school, wearing a spacesuit costume, shows a self made paper rocket during their project Mission to Mars in Lausanne, on March 17, 2021. While the world for the past month has been riveted by the escapades of the Perseverence Mars rover, a group of Swiss fourth-graders has been making final preparations for their own mission to the red planet. Source: Stefan Wermuth/AFP

Inside the base, with his helmet — actually a face-covering scuba-diving mask — under his arm, Leo says this “analogue mission to Mars” made him all the more eager to see the real thing. “But I don’t want to land where Perseverance landed. It’s radioactive there and very cold,” he said.

In a bid to simulate a true space mission, all the children’s meals consist of freeze-dried space food. Initial plans for them to sleep on site were meanwhile scrapped due to the COVID-19 pandemic. “Our biggest concern is not bringing the virus to Mars,” Olivier Delamadeleine, head of the Educalis group that runs the school, told AFP. The mission fits with the school’s general approach aimed at deepening the students’ learning through “real life” experiences, he said.

During the months of preparation, the children participated in workshops on astronomy and rocket engineering hosted by students at the neighbouring EPFL — among the most prestigious technical universities in Europe.

The mission required them to use mathematics to calculate the distance to Mars, and they have also sharpened their language skills, learning how to spell the names of the planets. Roussel said the mission was “a win” for a teacher seeking to motivate his students.

The first experiment the team embarks upon after arriving at the space station is launching home-made paper rockets into space. The children get to work rolling sheets of paper into tubes, before adding pointed paper tips and fins.

Ewan, the project’s appointed leader, recommends using a lot of tape. “We are going to pump air into them, so it is important to close them tightly,” the youngster explains.

He pulls on his mask and heads out to help secure the launch site with safety cones and tape. When the other children arrive, he helps Roussel place one rocket on a large metal contraption attached to a pump. When they flip a red lever on the valve, the paper rocket flies as high as the treetops amid wild applause. 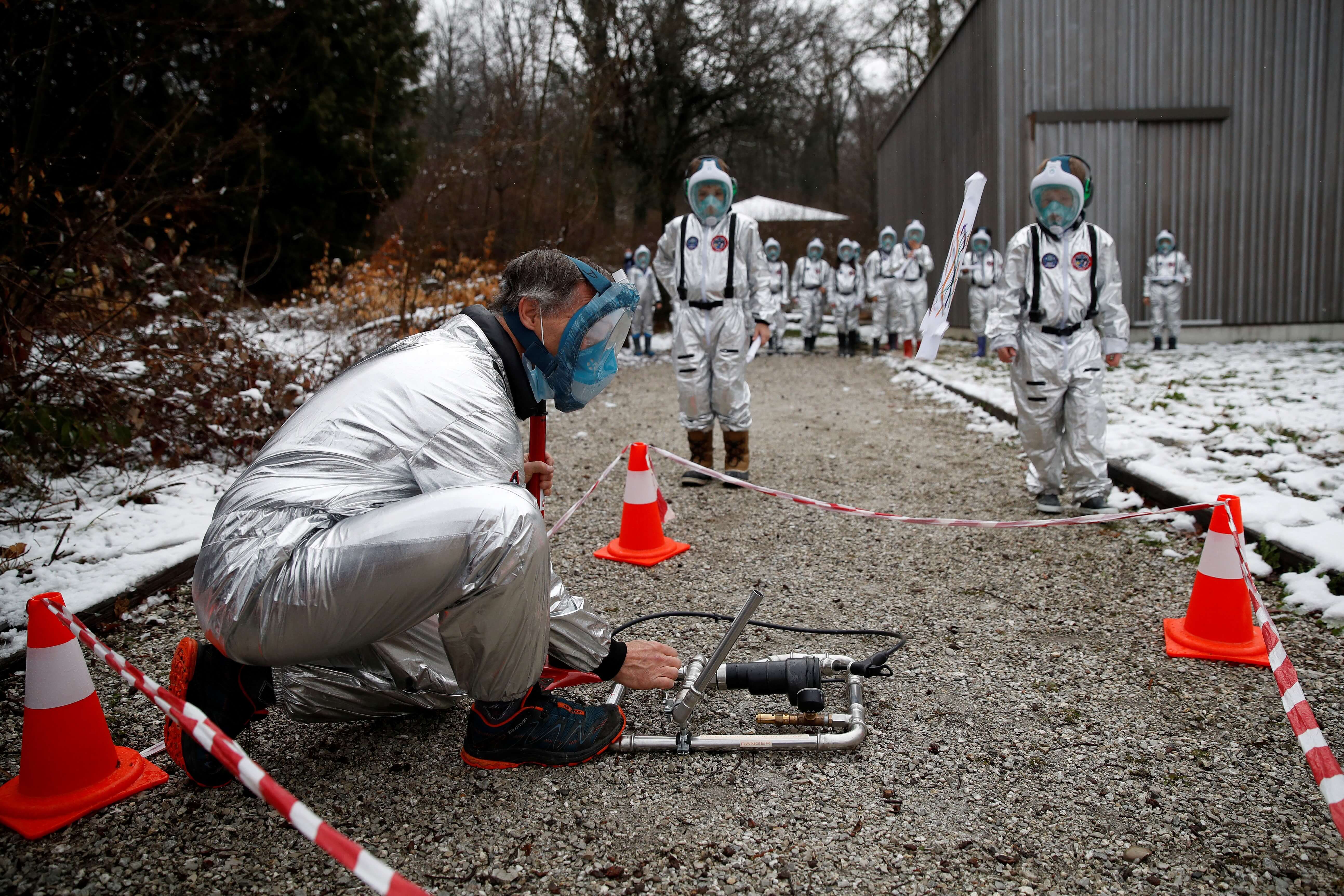 A teacher and pupils of the Ecole Vivalys elementary school, wearing spacesuits costumes, launch a paper rocket during their project Mission to Mars in Lausanne, on March 17, 2021. While the world for the past month has been riveted by the escapades of the Perseverence Mars rover, a group of Swiss fourth-graders has been making final preparations for their own mission to the red planet. Source: Stefan Wermuth/AFP

After all the rockets have been launched, the children have a debrief Zoom session with Jonas Morfin, known as “Jupiter Jonas”, at EPFL’s Space Innovation unit. Lined up in front of the camera, they detail the problems some rockets ran into, and he provides pointers on how to improve the structures for the next launch. “Maybe reinforce the next one with more tape?” Morfin tells a girl whose rocket exploded in mid-air.

The preparation for the mission, and especially the Zoom conversation earlier this month with Nicollier, has left some children dreaming about becoming astronauts themselves. “That’s what I have in mind,” Leo said. “Now I want to be a scientist or an astronaut.”

Perseverance’s images from Mars have also left some children eager to see humans walk on the red planet. “It’s possible for robots,” said Nina, one of two children named mission leaders. “I think it will be possible for us too, soon.”

A Gilman Scholar seeks Black power in the written word

From the classroom: A BSc in Mechanical Engineering at Einstein’s alma mater

5 reasons to study business in Switzerland