‘I’m terrified to go back to Russia’: Russian students fear reprisal from war

The ongoing war on Ukraine has spared no one linked to the conflict, including Russian students abroad. Many find themselves reluctantly caught in a war they are opposed to. Some students even dread returning home for fear of reprisal in their resistance to state propaganda in justifying an invasion that has resulted in two million refugees.

“I’m terribly ashamed of my country and I’m sorry that it’s happening. I know my problem is nothing in comparison with what Ukrainians are experiencing, and my heart is with them,” writes a Russian Reddit user, who is an international student in Germany.

“But this situation made me realise that I’m terrified to come back to Russia. I don’t want to have anything to do with it. I want to be a decent person represented by a decent, moral government.”

This cold dose of reality isn’t alien to Russian students overseas, many of whom feel as helpless as their Ukrainian counterparts in witnessing the war from afar, while navigating conflicting emotions of guilt, shame, and anxiety.

Tatiana, a Cambridge-based Russian student expressed similar sentiments when thinking about her family back home. “My parents feel a moral responsibility to protest against the war but it is very dangerous. I am protesting in Cambridge but I am safe. I don’t go out on the streets and wonder if I will be tortured or put in prison for 15 years for opposing the government,”she was quoted saying to The Guardian.

“There is no equivalence between the suffering of Ukrainians and what Russian students in the UK are experiencing. But it is important to remember that these students are probably cut off from their families and may be feeling very alone,” said Dr. Olga Petri, a Russian geography researcher at the university. 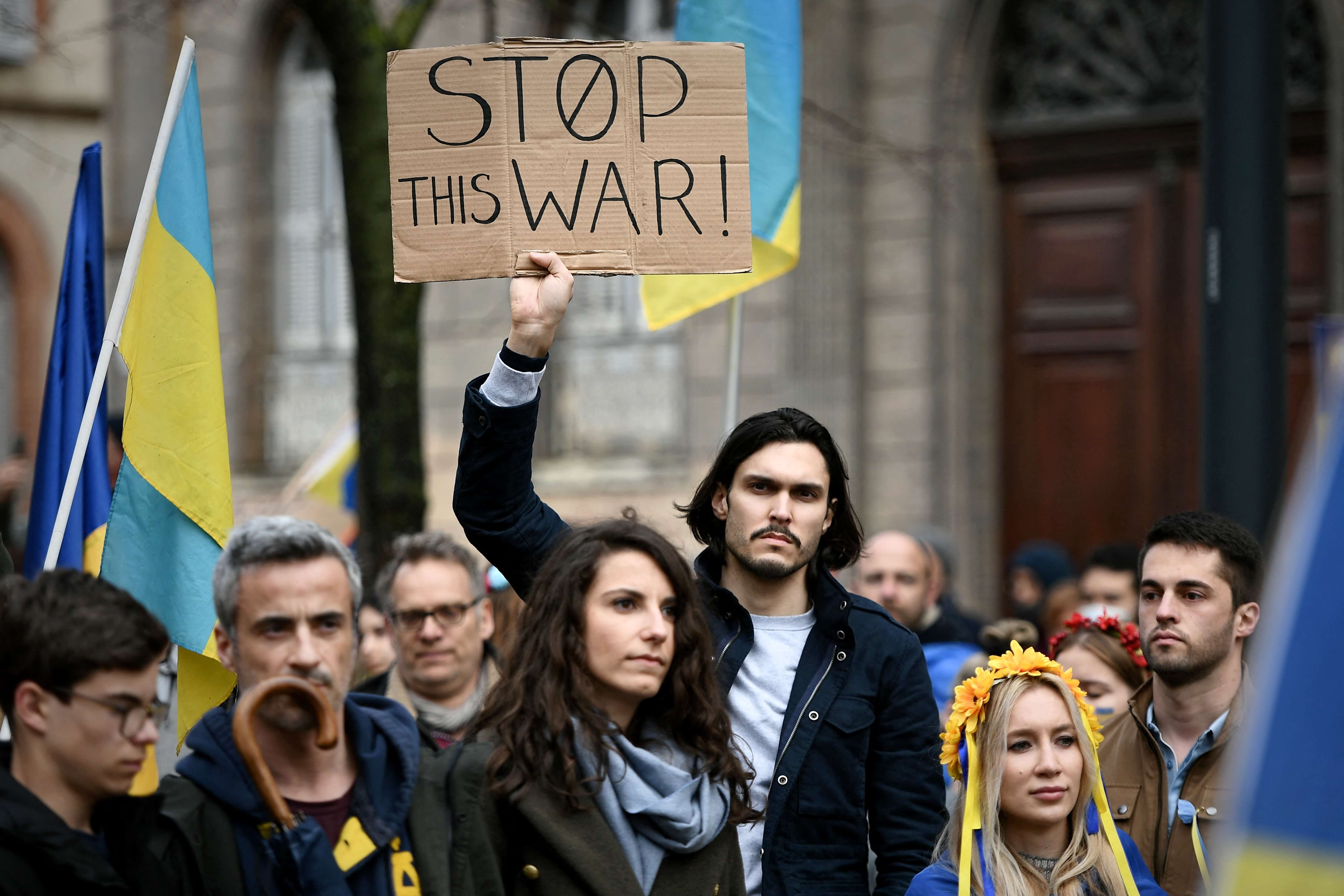 Russian international students who oppose the war on Ukraine fear reprisal at home, and worry for the safety of their families who share similar views over their government’s actions. Source: Valentine Chapuis/AFP

In Canada, Russian students opposed to the war on Ukraine are caught in a similar bind. Students are facing added strain financially due to the economic sanctions on Russia, which sharply devalued the rouble currency and effectively cut off the country’s banks from international transactions.

“The financial situation is quite difficult,” Yana Kuzmenko, a Russian graduate of Western University, said to CBC News in an interview. “It’s very hard to send money from Russia into other countries, and there are also limits on foreign currency even for everyday folks.”

“I left Russia nine years ago to escape these kinds of situations, and now everyday you feel like you’re in a nightmare that you’re trying to wake up from,” she said.

Russian students in Canada are reported to have faced hate and xenophobia over their government’s actions in the war on Ukraine. Kuzmenko, who has family and friends in Ukraine, detests the war and cautions others to not conflate the government’s views with what ordinary Russians are feeling.

“We [Russians] receive hate in some way or another, some of our friends have turned away from us. I’m against war and I don’t think this is justified in any way,” Kuzmenko told CBC News.

Russian students abroad are struggling to stay financially afloat due to the economic sanctions imposed on their country. Source: Michal Cizek/AFP

“Right now, I’m financially cut off from home,” he was quoted saying to CBC News. The second-year engineering student at the University of British Columbia (UBC) despairs over his uncertain future but acknowledges that his suffering pales in comparison to what his Ukrainian friends are facing.

Meshcherin works part-time to make ends meet, but his earnings won’t be enough to cover his tuition fees — a situation familiar to nearly 160 Russian students enrolled at the university. UBC, however, has encouraged them to reach out for assistance if they are financially impacted by the sanctions on their home country, CTV News reports.

“If you happen to be a Russian student having issues with financial support, speak to your enrolment services provider,” Matthew Ramsey, the university’s spokesperson, was quoted saying by the news outlet. “That’s what they’re there for. They’re there to help.”

Earlier, UBC had to remove anti-Russian messages painted near the university’s engineering department. The comments “Russians Go Home” and “F*** Putin” were seen on a concrete sculpture. “We’re not aware of who painted the messages regarding Russia this weekend, but UBC crews have removed all hate speech and explicit content,” the university responded.

How will the sanctions on Russia affect university students?