These women entrepreneurs in India are changing the world

India is home to some of the most successful people in the world. With a thriving community of ambitious, intelligent students, Indians all around the country are utilising every opportunity to pursue their dreams, and often win some of the world’s most prestigious scholarships and awards whilst doing so.

It’s no surprise that the women entrepreneurs in India are some of the most successful in the world, and this is only set to increase. For the first time in history, the Indian government has found that the country’s population is comprised of more women than men, making for a host of young female leaders who are taking the country by storm.

Here are four women entrepreneurs in India who are changing our global landscape, and their educational backgrounds.

Aditi Gupta was tired of the taboo surrounding menstruation. Despite it being a normal bodily function for women worldwide, she found a startling lack of awareness and communication surrounding the topic, even amongst the most educated of people.

Determined to bring about change, Gupta collected information about menstruation from a host of doctors and girls and started a comic book with her husband. She named it Menstrupedia, playing on how it serves to educate women and girls about periods in a fun and informative way. Today, the comic is available in 20 languages and is used by over 10,000 schools in India and in 23 countries around the world.

Gupta gained a postgraduate education from the National Institute of Design. Today, she has gained nationwide recognition for her work and is a TED speaker, a UN Goalkeeper, and among BBC’s 100 women.

Anisha Singh has made a name for herself in the business world — by investing in and backing female founders and -focused businesses. She’s the founder of She Capital, an early-stage fund investing in women-focused or women-led ventures with high growth potential. It also aims to empower women entrepreneurs in India who may face biases or disadvantages when navigating their fields.

This initiative was in part instigated by Singh’s previous start-up, Mydala, which she was the CEO and co-founder of. It now happens to be India’s biggest deals platform. When she first started Mydala, she found herself one of the only women entrepreneurs in India. Now, she mentors future female leaders and openly supports many women-centric causes and campaigns.

Singh has an MA in Public Communication and an MBA in Management of Information Systems from the American University. 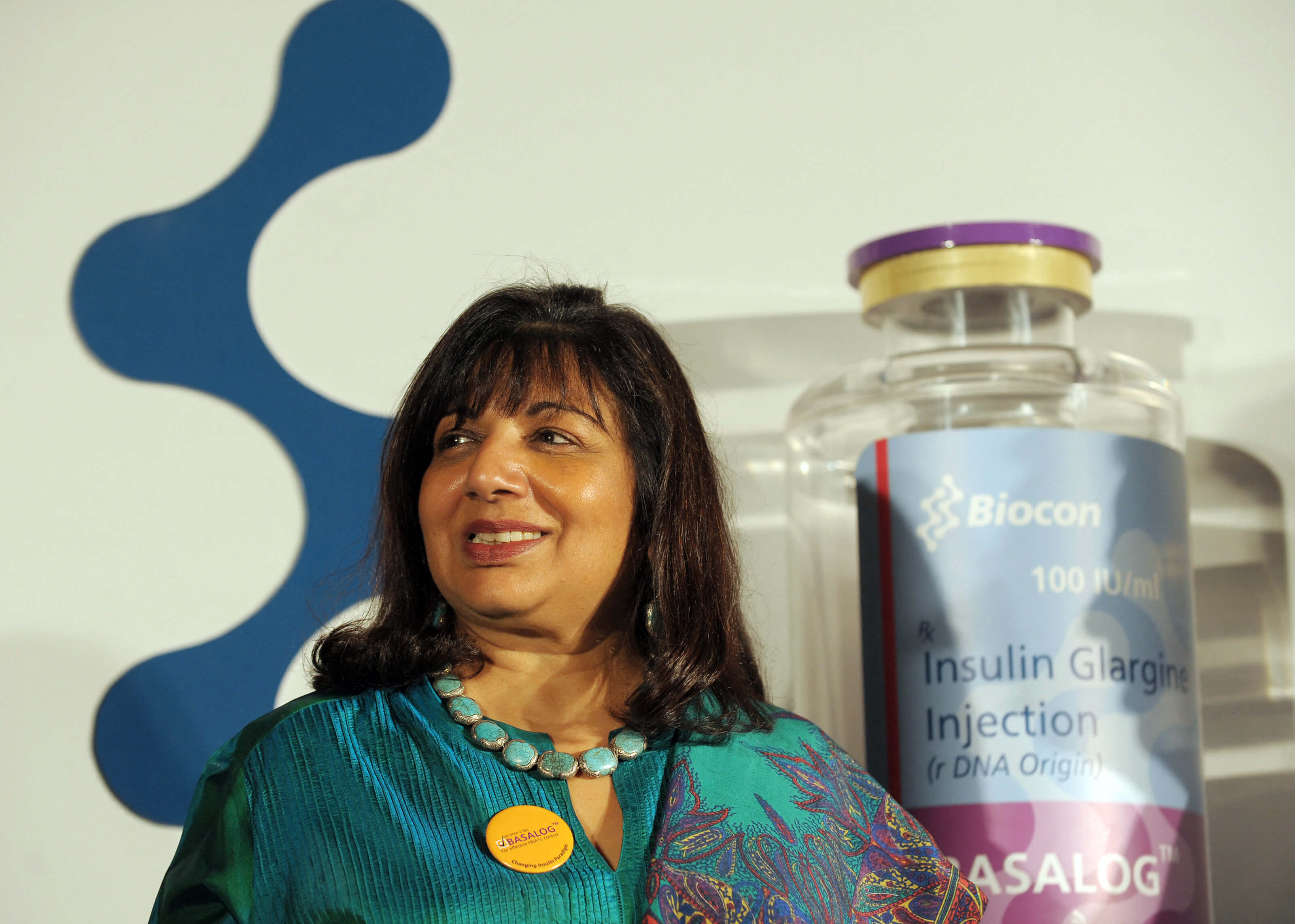 Kiran Mazumdar-Shaw has been named one of the 100 most influential people in the world for her work in biotechnology. Source: Dibyangshu Sarkar/AFP

No list of women entrepreneurs in India would be complete without mentioning Kiran Mazumdar-Shaw. Mazumdar-Shaw is the founder and chairman of Biocon Limited, which grew to become India’s largest listed biopharmaceutical firm by revenue. Through her guidance, Biocon has helped transform the landscape of biotechnology worldwide, allowing for reduced therapy costs of chronic conditions for thousands of people. It’s now a $100 billion international operation.

For her work, Mazumdar-Shaw has been named among TIME magazine’s 100 most influential people in the world. She’s also known as India’s wealthiest self-made women and one of the 100 most powerful women in the world.

Mazumdar-Shaw graduated with a BSc with Honours in Zoology from Bangalore University and a postgraduate diploma in Malting and Brewing from the University of Ballarat, Melbourne. She has also received several honorary doctorates from a list of prestigious universities, including Deakin University, the University of Glasgow, and Heriot-Watt University.

Growing up in Gujarat, Upasana Taku had not seen many women entrepreneurs in India. She graduated from the National Institute of Technology with a degree in industrial engineering. Hailing from a family of teachers and academics, she did not even consider entrepreneurship to be on the cards.

A masters in management science and engineering from Stanford University changed her mind. Taku went on to work in Silicon Valley corporate giants such as HSBC and PayPal before returning to India. She then co-founded Mobikwik, a digital credit and payments platform, in the hopes of providing Indians with a quick and easy way to complete transactions.

Mobikiwik has grown to become India’s largest digital payments company, with over 120 million users, three million merchants, and over 300 billers. Today, Taku is a leading figure of fintech in India and has been recognised by Forbes and many other global platforms for her outstanding contributions to India’s digital landscape.

Want to work with Formula One? Here’s how you can get started